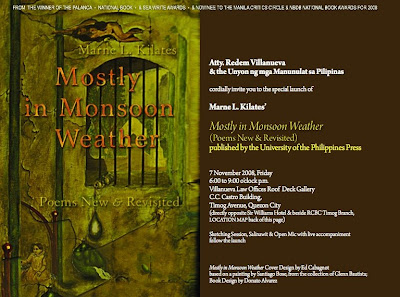 from sir marne kilates:
"After movies, poetry makes a good antidote to the recession blues.
When economies are in recession more people go to the movies, according to economists and movie producers. Some people read poetry, poets and publishers would say. If you belong to the second kind, Mostly in Monsoon Weather, the third collection of award-winning poet Marne L. Kilates, may just be the book for you for just slightly above the price of a movie..."
Posted by ramblingsoul at 4:01 PM

Speak in monotones,
love to mumble, gather
around the mahjong tables
all night, their gibberish
wafting past the thin curtains.

They keep to their own counsel,
check that principles are intact
and when, having had too much
to drink, or having lost a good sum
of money, they start to drone,

buzzing about politics and business,
how when they were younger,
they were so beautiful, so more
musical, more iambic. Like the beginning
of My Way—as if they have lost

their interest (and now, the end
is near…) but still they assemble back
to the gamble, grand shuffling of ivory,
wrecks of old postures recovered now
in the palming of an upturned flower.

and ringing Blue Bayou choruses.
Posted by ramblingsoul at 9:13 AM 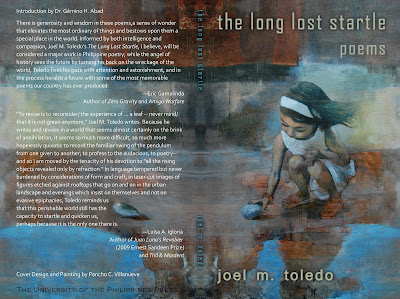 semi-final cover design for my next book. due (hopefully) to come out this November. from my beloved Alma Mater's printing press :)
***
announcement from sir Vim Nadera:
Exactly a month ago, we got invited to the Camp Rock Drilon – better known as Mag:Net Gallery.
We were in his most beloved branch, along Katipunan, and all the boyz in the hood seemed to be in a brotherhood mood, like more the Bonifacios than the Jonases, so we got into the next best thing to a blood compact, after the proposed toast by the Rock, we agreed to host – Every Last Monday Of The Month!
E.L.M.O.T.M. is too forgettable as the name “Duane Johnson,” as against “The Rock,” so we settled, in less than an hour of red wine and bamboo shoot in coconut milk, for O.M.G.
Or Open Mic Gig!
Yes, everyone can jam but for its opening on October 27, from 7 to 9 p.m., so we invited special guests, headed by our National Artist Virgilio and University Professor Emeritus Gemino Abad.
They will be joined in by Joes, Nicks and Kevins of Philippine Literature --
Jose Marte Abueg, Yanna Acosta and her band, Tata Funilas, Marne Kilates, Ed Maranan, Nick Pichay, Danton Remoto, Joseph Saguid, Angelo Suarez, Joel Toledo, Lourd de Veyra, Krip Yuson, and the Neo Angono Artists Collective that will hold again its 5th Public Art Festival on 20-22 November!
And next month, too, in celebration of Jose Corazon de Jesus' birthday, Teo Antonio and Mike Coroza will relive the Huseng Batute heyday with Ony Carcamo, Alitaptap Storytellers Philippines, U.P. Speca, and the Tribu Rappers on November 24.

For more details, please email mb.malay@gmail.com.
***
btw, a newer poem of mine titled "Sun in Empty Room" is up in the October issue of sir Marne Kilates' Poet's Picturebook. :)
Posted by ramblingsoul at 11:19 AM

The Ongoing WOW! That Is Happening Right NOW! 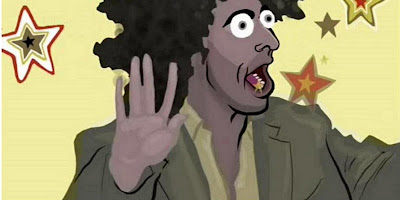 City That Does Not Sleep

In the sky there is nobody asleep. Nobody, nobody.
Nobody is asleep.
The creatures of the moon sniff and prowl about their cabins.
The living iguanas will come and bite the men who do not dream,
and the man who rushes out with his spirit broken will meet on the
street corner
the unbelievable alligator quiet beneath the tender protest of the
stars.
Nobody is asleep on earth. Nobody, nobody.
Nobody is asleep.
In a graveyard far off there is a corpse
who has moaned for three years
because of a dry countryside on his knee;
and that boy they buried this morning cried so much
it was necessary to call out the dogs to keep him quiet.
Life is not a dream. Careful! Careful! Careful!
We fall down the stairs in order to eat the moist earth
or we climb to the knife edge of the snow with the voices of the dead
dahlias.
But forgetfulness does not exist, dreams do not exist;
flesh exists. Kisses tie our mouths
in a thicket of new veins,
and whoever his pain pains will feel that pain forever
and whoever is afraid of death will carry it on his shoulders.
One day
the horses will live in the saloons
and the enraged ants
will throw themselves on the yellow skies that take refuge in the
eyes of cows.

Another day
we will watch the preserved butterflies rise from the dead
and still walking through a country of gray sponges and silent boats
we will watch our ring flash and roses spring from our tongue.
Careful! Be careful! Be careful!
The men who still have marks of the claw and the thunderstorm,
and that boy who cries because he has never heard of the invention
of the bridge,
or that dead man who possesses now only his head and a shoe,
we must carry them to the wall where the iguanas and the snakes
are waiting,
where the bear's teeth are waiting,
where the mummified hand of the boy is waiting,
and the hair of the camel stands on end with a violent blue shudder.
Nobody is sleeping in the sky. Nobody, nobody.
Nobody is sleeping.
If someone does close his eyes,
a whip, boys, a whip!
Let there be a landscape of open eyes
and bitter wounds on fire.
No one is sleeping in this world. No one, no one.
I have said it before.
No one is sleeping.
But if someone grows too much moss on his temples during the
night,
open the stage trapdoors so he can see in the moonlight
the lying goblets, and the poison, and the skull of the theaters.

by Federico García Lorca
Translated by Robert Bly
"On this bridge, Lorca warns: life is not a dream.Beware, and beware, and beware!And so many think because then happened, now isn’t.But didn’t I mention, the on-going WOW is happening, right now!We are all co-authors of this dancing exuberance, where even our inabilities are having a roast! We are the authors of ourselves, co-authoring a gigantic Dostoevsky novel starring clowns!This entire thing we’re involved with called the world, is an opportunity to exhibit how exciting alienation can be.Life is a matter of a miracle, that is collected over time by moments flabbergasted to be in each others’ presence.The world is an exam, to see if we can rise into the direct experiences. Our eyesight is here as a test to see if we can see beyond it, matter is here as a test for our curiosity, doubt is here as an exam for our vitality.Thomas Mann wrote that he would rather participate in life than write a hundred stories. Giacometti was once run down by a car, and he recalled falling in to a lucid faint, a sudden exhilaration, as he realized at last, something was happening to him.An assumption develops that you can not understand life and live life simultaneously. I do not agree entirely, which is to say I do not exactly disagree. I would say, that life understood is life lived. But the paradoxes bug me. And I can learn to love, and make love to the paradoxes that bug me. And on really romantic evenings of Self, I go salsa dancing with my confusion.Before you drift off, don’t forget, which is to say remember. Because remembering is so much more a psychotic activity than forgetting. Lorca, in that same poem, said that the iguana will bite those who do not dream. And, as one realizes, that one is a dream-figure in another person’s dream: that is self-awareness!"
Timothy Levitch, monologue from Waking Life
Posted by ramblingsoul at 2:26 PM 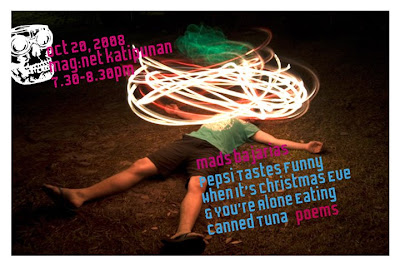 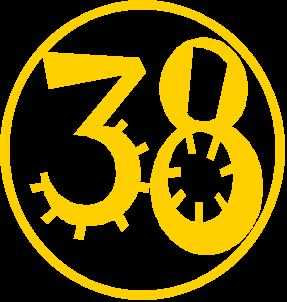 featured readers for the 38th installment of the bi-weekly Happy Mondays Poetry Nights and the launch of Mads bajarias' first book of poems titled Pepsi Tastes Funny When It's Christmas Eve & You're Alone Eating Canned Tuna @ mag:net cafe Katipunan tomorrow, October 20, are as follows:
1. Lourd De Veyra
2. Adam David
3. Angelo Suarez
4. Conchitina Cruz
5. Voltaire Veneracion
6. Jay Bautista
*those above are reading poems from Mads' book
7. Camille Banzon
8. Arkaye Kierulf
9. Mia Tijam
10. Allan Pastrana
11. Marie La Viña
12. Emong De Borja
the launch of Mads' book will run from 730 to 830pm, followed the other featured 6 readers above for the regular Happy Mondays readings, which will commence at 830pm.
*the following books will be raffled off to lucky readers, courtesy of avalon.ph:
1. Only Revolutions by Mark Z. Danielewski (HB)
2. The Lady and the Unicorn by Tracy Chevalier (TPB)
3. The Natural by Bernard Malamud (TPB)
*for those interested in reading during the open mic at 930pm, we will have a sign up sheet left with Rogel, the bar tender of mag:net cafe. please feel free to sign up and read your work. :)
performers/bands playing 10pm onwards are as follows:
1. Boyet Vasquez
2. Johnoy Danao
3. Armando's XP
4. Broken Sauce
5. Biscochong Halimaw
FREE ADMISSION the whole evening. kitakits po tayo! :)
Posted by ramblingsoul at 6:55 PM 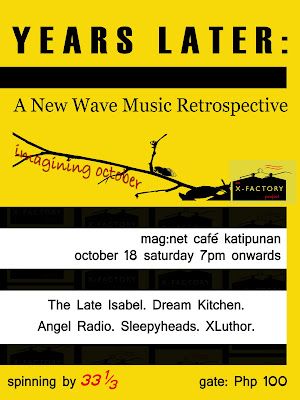 the shadow cabinet opens at 7pm with spinning of '80s anthems, oddities, and rarities by MC Mike and DJ Rayg of 33 1/3 . everyone's welcome to show-off their new wave dancing skillz!

The Years Later Sessions take place every second Saturday of the month.

***
and, in keeping with the post-punk spirit, check out this Über-hilarious version of A-Ha's classic ditty, "Take on Me" on YouTube.

Posted by ramblingsoul at 9:10 AM 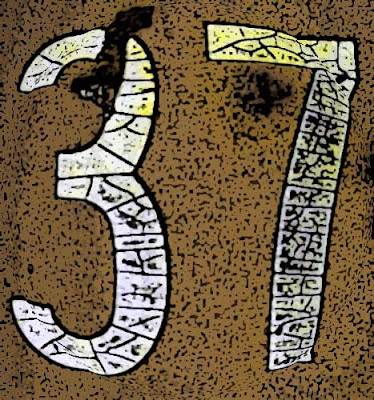 below are the list of readers for the 37th installment of the Happy Mondays Poetry Nights @ mag:net cafe, Katipunan for tomorrow, October 6:

*reading starts promptly at 7:30pm followed by the open mic. for those interested in reading, we will leave a sign up sheet with Rogel, the bar tender of mag:net cafe. please feel free to sign up and read your work. :)