Warning: Poetry is Good for Your Health

Is Poetry the New Prozac?
by Christina Patterson
27 January 2006

Poetry is good for your health. That, at least, is the premise of studies currently under way for the Arts Council and the Department of Health. One study, published a couple of years ago in the journal Psychological Reports, suggested that writing poetry boosted levels of secretory immunoglobin A. Another, undertaken by a consultant at Bristol Royal Infirmary, concluded that poetry enabled seven per cent of mental health patients to be weaned off their anti-depressants. Poetry, it seems, is not the new rock'n'roll, but the new Prozac.

This was not instantly evident at the ceremony for the TS Eliot poetry prize last week. Perhaps it was the strip-lighting, but the assembled throng of pasty faces and panda-shadowed eyes did little to foster a sense of radiant health. As feel-good events go, it ranked just above a tussle with your online tax return, but probably below a Thai takeaway in front of Celebrity Big Brother. It was, of course, not fair of Cyril Connolly to describe poets as "jackals fighting over an empty well", but it is true that £10,000 prizes do not, on the whole, boost the health and happiness of those who don't win.

The prize, in any case, went to a paean to psychosis. Carol Ann Duffy's collection of love poems, Rapture, is a moving and, at times, skin-crawlingly accurate portrayal of a process that psychologists have recently identified as a form of madness. We have all been there: tending the mobile "like an injured bird", repeating the name "like a charm, like a spell". For most of us, falling in love is a season in what Duffy calls "glamorous hell", and not a sojourn. We might suffer a few sleepless nights, or even eat a bit less than usual, but we can't sustain life at this pitch. And, luckily for us, our minds comply.

Many poets - a higher proportion, apparently, than of the average population - are not so lucky. John Clare, Anne Sexton, Robert Lowell and, most famously, Sylvia Plath, all knew the torments of a mind that would, on occasion, burst out of the crucible of what Freud called "normal human misery" into the nameless horrors of mania. The mad poet may be a cliché, but it is not a myth. Poets continue to write of their experiences of mental illness. If poetry is some kind of wonder-drug, it sure ain't working for them.

So who is making these headline-hitting assertions, and why? The answer, of course, is arts administrators, and they're doing it for money. And kindness, and the philanthropic impulse, and passion and a desire to help the lost and the lonely and the miserable and the mad. But, to do all this, you need money, and to get money you need to go to funders, and to go to funders you need studies, evidence, and results.

A current project is a good example. Poems in the Waiting Room was set up by an enthusiastic social worker eight years ago. Run, like most of these things, on a shoestring, it has had little pots of funds from trusts and foundations as well as the Arts Council, the Poetry Society and the Foreign Office. It aims are, you'd have thought, worthy and modest: to cheer up miserable places (hospital waiting rooms) at an anxious time with a little injection of art.

Their online "evaluation", however, tells a different story. Amongst a dizzying range of aims and objectives listed in its executive summary are "to gauge the external consequences of displaying poems in waiting rooms", to see "what new behaviour follows" and "what new activities". An extensive discussion of the "methodology" follows, with tables of facts and figures. The one thing, in fact, that the project doesn't allow for is for someone to read a poem and keep quiet about it. This is poetry as life-coaching. You must read and act and reach your goal. And you must do this in an act of self-improvement in which most poets, critics and readers have failed.

In a brave moment of honesty and bathos, the project's organisers assert that "the precise impact of the poems displayed... was always going to be hard to measure". The final report consists, as these things always do, of pages of anecdote masquerading as science, and ends with the hope that further funding be found. My heart went out to the organisers. Like most of us, they're simply doing their best in a league-table culture where everything is judged by results.

There is, in the right hands, a fine role for poetry as social work, but let's not pretend that it's the same as poetry as art. Poetry, like all art, is not a panacea. Perhaps it's more like homeopathy. A great placebo - some people swear by it - but the studies are inconclusive.
Posted by ramblingsoul at 12:13 PM 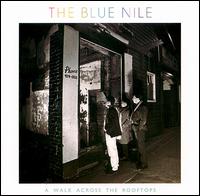 A Walk Across the Rooftops
The Blue Nile
1984

This debut album by Paul Buchanan and the rest of The Blue Nile was easily one of the more important releases to emerge from the so-called '80s new romantic scene. Most of the tracks in the album offered a novel mixture of stripped-down electronic backbeats with haunting, almost eerie melodies that complemented Buchanan's sad and heartfelt words. It has been claimed by many critics as an album way ahead of its time, primarily because the band chose to relegate to the background the screaming synths and danceable rhythms that were all the rage in that era.

While A Walk Across the Rooftops did house the popular (and danceable) new wave anthem, "Stay," most of the other songs are slow and folksy, progressing along a more soulful and introspective line. When Buchanan wails "The lights are always changing/The black and white horizon/I leave the redstone building/And walk across the rooftops..."(A Walk Across the Rooftops) or the more direct, "Do I love you? Yes, I love you. Will we always be happy-go-lucky?"(Tinseltown in the Rain), his scarred voice seems for a moment to make up all the melancholy in the world. He was no Jeff Buckley or Mark Kozelek (Red House Painters), but it probably was better that way. And this will become clear in the bands' succeeding albums, which has been hailed as two of the most important albums of the past two decades (Hats and Peace at Last, respectively).

Now with four albums under their name (the latest to be released was the again acclaimed High, in 2004), The Blue Nile have cemented their status as an important and (still) influential force in the modern rock scene.

The line of traffic comes to a stand still
For the love King, out in the morning air
I find a place I started from
The wild is calling, this time I follow
Easter parade

I know you, birthday cards and silent music
Paperbacks and Sunday clothes

In hallways and railway stations
Radio across the morning air
A crowd of people everywhere
And then the people, all running forward

I love how things attach themselves
to other things. The rocks sitting stubbornly
beneath a river, beards of moss.

I choose a color and it connotes sadness.
How long must the symbols remain true? Blue
is blue, not lonely. After a time, one gives up

reading the sky for shadows, even rain.
There is no promise, only a possibility.
A moment moves to another, and still it feels

the same. Like old letters in boxes,
or how the rain, at times, falls invisibly.
Finally, the things we love demand more love,

as if we have always been capable of it. Yet
I can only offer belief, mirages that mean water,
long travels that lead somewhere. I am reading

old letters, trying to make something
of what's been said. It might be raining;
some pages are unreadable.
Posted by ramblingsoul at 5:49 PM 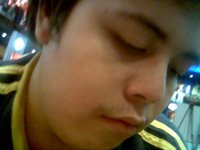 Thanks so much to Ms. Eileen Tabios, Ms. Jean Vengua, and the people from Meritage Press. Congrats to all the winners, especially bayaw Arkaye and Kael.

Meritage Press is delighted to congratulate the following winners for the 2005 "Babaylan Speaks" Poetry Contest, judged by Jean Vengua:

HONORABLE MENTIONS:
"A House" by Mikael de Lara Co
"Save as Draft" by Joel M. Toledo
"APO BAKIT" by Amalia B. Bueno

To see the winning poems and the Judge's Commentary, please go to the Meritage Press website.

In which the holy man carries the child
up the mountain, and the world is changed

Because in every collapse
the body is drawn into itself.
And, because the sacrifice
will lead to an understanding
of the fallen child, the prophet
climbs upward and endures the voices.

He closes his eyes,
wondering how he can just leave
everything behind: the faces of children
with their round, doomed eyes,
their hands crushing flowers, and how
the wind kept resurrecting the fallen leaves.

He trembles slightly, almost losing
his footing. There must be a lesson
to be learned here, he says to himself, even
in the resisting. Meanwhile, the path ahead
climbs upward, gives way to a certain
solitude. For this, he wept.

There are too many questions. But
this one is moving quickly toward a resolution. Surely
the weight of the world can be so natural.
But the child, the gradual loss—
He is too young, he murmurs. He is unready
for such faith, such curious display of love.

The years have softened the man,
his face marred by wisdom and diminished
strength. He ambles onward, his hands
slow and yet with each painful step,
the sky is opening for him. He thinks himself
unfairly dressed for departure, but

his people won’t have it otherwise.
The ceremony must be followed. And as his back
fades into the glare, the old man accepts his role.
He is the symbol of His age, the bearer of meaning,
the body He carries more feeble than His own:
the impossible burden of His child, a young 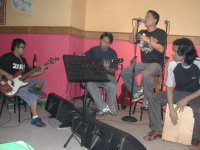 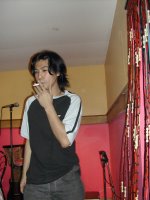 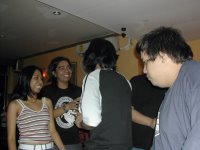 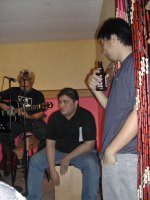 Some photos from the Los Chupacabras gig last monday in Cafe Ysabela, courtesy of sir Krip. Also, check out Paolo Manalo's tigidigging of our song, "Santa Rules" (hehe).
Posted by ramblingsoul at 5:41 PM 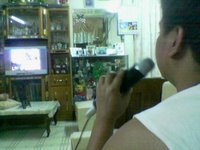