I've been tagged in a blog chain called the Next Big Thing by fellow writer Zoe Strachan (Website: www.zoestrachan.com). Zoe is a novelist, short story writer, librettist and playwright. Her most recent novel is Ever Fallen in Love (http://www.amazon.co.uk/Ever-Fallen-Love-Zoe-Strachan/dp/1905207735)

Zoe has asked me to answer some questions about my latest book, and then to tag five other authors about their Next Big Thing. So here I go, reviving this blog as well!

What is the title of your book?

Where did the idea come from for the book?

The impetus for this collection is largely the flooding brought about by typhoon Ketsana in Metro Manila in 2009 and the sudden demise of my mother in 2010.

What genre does your book fall under?

Which actors would you choose to play your characters in a movie rendition?

It’s hard to think of a movie adaptation/rendition for a poetry collection. Haha.

What is the one-sentence synopsis of your book?

Ruins and Reconstructions explores, in four lyric sections, both the wreckage and needed recovery of a persona trying to come to terms with phenomenal, conceptual, and dialectal concerns in contemporary poetry in English. It has a patina of the postcolonial as well.

Is your book self-published or represented by an agency?

It is published by Anvil Publishing, one of the biggest publishing houses in the Philippines. So, yeah, it’s not self-published.

How long did it take you to write the first draft of your manuscript?

It took about two and a half years to finish the collection. But it began with a suite of eight to ten poems. The book was finally realized during a residency in Bellagio, Italy courtesy of a grant from the Rockefeller Foundation.

What other books would you compare this collection to within your genre?

It’s hard to compare, content-wise, as the book is quite thematic and driven mainly by the phenomenal. But I guess some of my influences in terms of linguistic and stylistic conceits are Robert Hass, John Ashbery, and Dean Young.

What else about your book might pique the reader's interest?

Ruins and Reconstructions was a finalist for the 2011 National Book Awards. 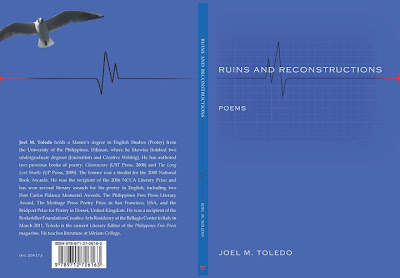 Here are five authors I've tagged to tell you about their Next Big Thing:

Posted by ramblingsoul at 5:12 PM